Meeting to be held at the Swan Hotel, 425 Church St, Richmond VIC 3121. Drinks and congenial talk at the bar with meals 6.30 to 8.00. Formal proceedings kick off at around 7.30pm sharp (approx) thereabouts! Our meetings are scheduled for the 4th Wednesday of each month except December.

The American Civil War Round Table of AustraliaCommemorating 150 years of the Civil War.

On 25 January 1865 the Confederate warship CSS Shenandoah dropped anchor in Hobson’s Bay in the port of Melbourne, Australia. The Rebel raider created great interest in the city with some 7,000 citizens making the rail journey to Sandridge to view the ship. Confederate officers were wined and dined at the prestigious Melbourne Club and later visited the goldfield town of Ballarat where a ball was held in their honour. The ship left Australian waters on 18 February after creating considerable controversy. Some of the crew deserted while some 40 men were recruited into Confederate service in contradiction of the British Neutrality Act which debarred British citizens entering service of a belligerent nation.

The Shenandoah was formerly the Sea King, a British commercial transport vessel. It was commissioned into Confederate service on 19 October and was captained by James Waddell, a North Carolinian with twenty years prior service in the United States Navy.

While in Melbourne the ship was slipped at Williamstown naval dock to undergo repairs before resuming its voyage.

In all the Shenandoah claimed 38 prizes, 32 of which were captured and burned after its Melbourne visit. Most of these were American whaling ships in northern waters.

At the International Court in Geneva in 1871 the US government was awarded damages of £820,000 against Britain for the loss of shipping caused after the Shenandoah’s use the port facilities in Melbourne.

The ship was surrendered to the British Navy in Liverpool on 6 November 1865.

Enter here for The Confederate Steamer – Shenandoah Extracts from the Creswick & Clunes Advertiser and the County of Talbot Agricultural Journal. 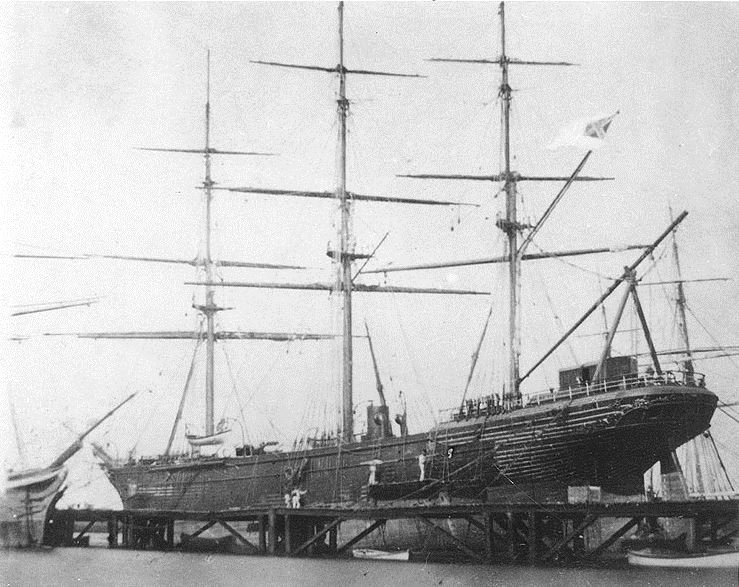 CSS Shenandoah hauled out for repairs at Melbourne 1865